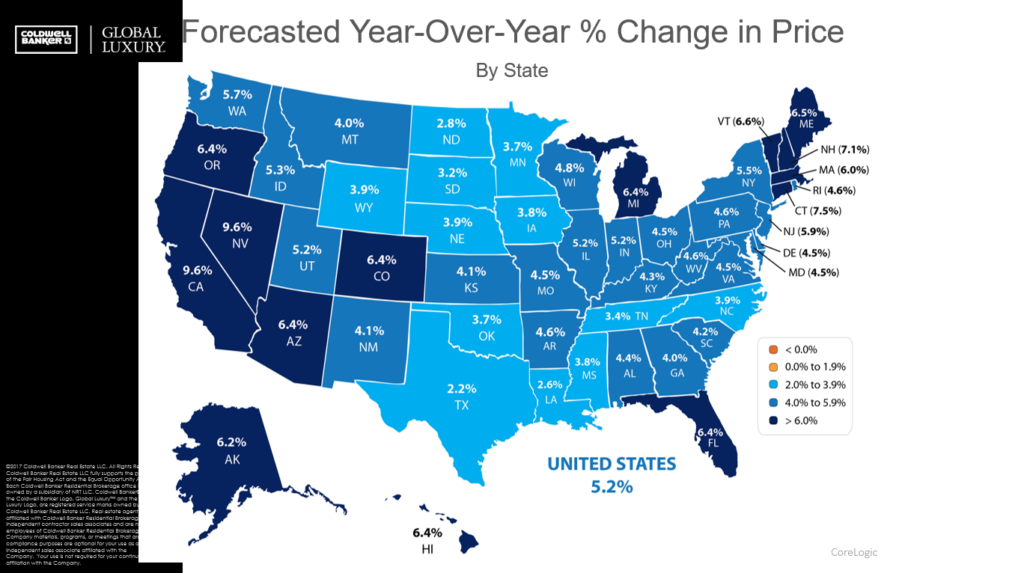 As a real estate professional, I’m asked the same questions all the time: “How’s the market? What’s the market doing? How do you think the market will look in the next few years?” It’s an important question for both potential home buyers and sellers alike. It seems like I’m being asked this question more often lately as the year draws to a close. Many of those people either have plans to buy or sell in 2018. Maybe you do as well, so here’s my take on what we can expect from the real estate market in 2018. But before we do that, let’s take a quick look at what the housing market in Orange County has done since the beginning of the year.

So this begs the question: What’s causing prices to rise so dramatically?The answer is rather simple: Supply and demand. Housing inventory is at an all-time low, and demand is high, due to a record-high stock market and relatively strong consumer trust in the economy. Svenja Gudell, chief economist at Zillow, told Forbes in August, “Everyone has been talking about tight inventory but I think we are OK calling it a straight up inventory crisis at this point… We just don’t have enough homes.” The housing shortage has more or less been a nationwide trend. But in Orange County, the average months of inventory has been steadily hovering between 2-3; anything under 4 is considered to be a seller’s market.

And that takes us into 2018. With no end to the inventory shortage in sight, continuously low interest rates, and positive economic trends, we shouldn’t expect anything but rising prices again next year. According to CoreLogic, a real estate analytics and big data firm, California housing prices are expected to rise by another 9.6% on average in 2018.
Market forces are the driving force behind upward prices; not because of any artificial, manipulative force, like the lax lending standards we saw prior to the crash of 2008/2009.

So what does this mean for buyers and sellers?

For buyers, it means that it’s still a good time to buy. Though home prices are definitely higher than they were 18-24 months ago, the good news is there’s still a good amount of runway left. According to one survey of over 100 economists, investment strategists, and real estate market analysts conducted by Pulsenomics and Zillow, the overall conclusion was that home prices would increase nationally at an estimated average of 3.4% through 2021. And what was their number one concern that might trigger another recession? A geopolitical crisis. 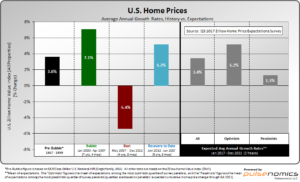 For those considering buying their first home, some that I’ve spoken to have considered holding off until the market takes a dip. However, the data shows that those who wait could actually end up paying a lot more in the future. The overall cost would not only be in terms of the increased purchase price, but also in opportunity cost of appreciation that would have been realized had they bought sooner.

Lastly, what does this mean for potentially home sellers?

Anyone whose had thoughts of selling, as long as they didn’t buy towards the peak of the bubble, should have a decent amount of equity built up in their homes and can use that equity to either buy up, or downsize and potentially hav a good amount of money left over. Move-up buyers can sell for a hefty price and then buy their next home with the safe expectation of appreciation over the next 5 years. For those looking to downsize, many owners are selling their larger homes and paying all cash for a smaller condominium or townhome, and still have a respectable amount of money to put in the bank. With rising prices, they may elect to not buy the home outright and instead take out a small mortgage with the expectation of refinancing the balance away after a few years, thereby keeping as much cash in the bank as possible.

However, those who don’t have a need to sell shouldn’t necessarily try to “time the market”. I’ve spoken with a few potential sellers that have considered liquidating their properties, renting for a few years, and then buying back in when the market corrects. Ultimately, what they’re trying to avoid is losing money on their home when and/or if the market takes a downturn. However, the opportunity cost of lost potential for appreciation should be considered as well, which could potentially be much more costly than a small correction.

Again, the overall consensus, even among the most pessimistic analysts, is that housing prices will continue to rise for the next 3-5 years. As long as any decision to buy or sell is made with reasonable expectations and a sound plan, the following years should continue to be very rewarding for both buyers and sellers alike.