More Tech Workers Cannot Afford To Live Where They Work 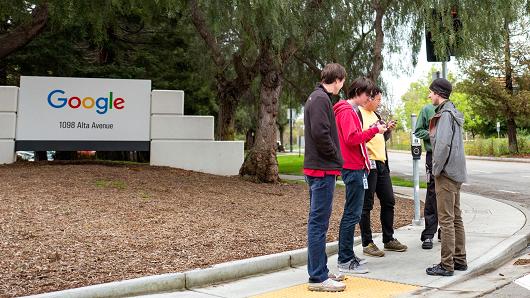 A group of millennial-age technology workers stand near signage for Google at the Googleplex, the Silicon Valley headquarters of search engine and technology company Google Inc in Mountain View, California.

Barely a decade after the worst housing crash in history, home prices are soaring, and fewer buyers are able to afford the homes they want. In fact, a growing number of Americans, including tech workers who are paid relatively well, are unable to live in the same communities where they work. Affordability for middle class workers is trending downwards because housing prices are increasing much faster than wages.

Researchers used the latest median wage data for each occupation group from the Labor Department’s employment report, and then calculated the share of homes for sale in each market that are affordable to each category of worker; they concluded that a mortgage should not take up more than 31% of a worker’s paycheck.

In tech-heavyCalifornia, where workers in the sector make six-figure salaries, very few can afford to buy a home. InSan Francisco, programmers can afford just 5 percent of the homes for sale, and in San Jose barely 12 percent, according to Trulia. Although these two cities have some of the highest housing prices in the state, it is still ridiculous that these workers, who earn a median wage of $122,993 in San Francisco and $115,660 in San Jose, cannot afford a decent home.

But it’s not just in California, where home prices are highest. Only about half of programmers inChicago, Charleston, Minneapolis, andNewark can afford to buy the median-priced home. The numbers are even lower inPortland andMiami.

Even worse for teachers and emergency workers

The situation is more dire for teachers and first responders, who make lower salaries and have seen very little wage growth due to state debt and budget cuts.

“Teachers are worse off in nearly all metros covered in this study,” noted Cheryl Young, Trulia’s senior economist. “More than one-quarter of the 93 metros saw a double-digit decrease in the share of homes affordable to teachers, led byTacoma, WA (-24.4 percentage points), Colorado Springs, CO (-21.7 p.p.) andIndianapolis, IN (-17.3 p.p.).”

While all real estate is local, the same increase is occurring in almost all major metropolitan markets. Demand is high and supply is low, especially at the lower end of the housing scale. Prices have been rising for years, but after a pullback in the gains last year, they are accelerating again. Rising mortgage rates only make matters worse.

“School teachers, police and fireman and so many hard-working folks all have to move much farther out of the midtown areas just to get a home they can afford,” said David Fogg, a real estate agent in Burbank. Many people commute even one to two hours to work because they cannot afford a house close to their job.