With the new year rolling in, let’s take a look at 2018 to see what we can expect as we sail forward. After 6 years of a strong market in Orange County Real Estate, 2018 downshifted to a lower gear and what we saw was an increase in days on market and lots of price drops. For many, especially those looking at the market on a national level, this might signify the beginning of the end.

With low mortgage rates, home sellers (with the assistance of some very savvy Realtors) kept pushing past market value and buyers eager to take advantage of low rates were willing to pony up. When the Federal Reserve announced incremental increases to the interest rates in 2018, buyers took note and started backing off. Active inventory, which normally peaks in July and August, extended to October as homes sat on the market longer and longer. Over time, more buyers were moving to the sidelines, content to watch and wait. Sound all too familiar?

The state of the market: your 2019 forecast
According to Justin Pinney, Real Estate Specialist, the Orange County housing market will not only survive but, it will continue to thrive: “Expect higher than usual inventory to begin 2019 with the market slowly picking up steam into Spring where it will peak around April. Orange County has still followed a strong pattern of selling though a little more subdued this year but that pattern will pick up through Spring and early Summer. Not to be touchy-feely and sing Kumbaya but, 2019, through early summer, should be good for both sides of the table providing sellers accept fair market values now and buyers recognize rates are still pretty good. A question now hangs over the Federal Reserve pushing their rate hikes as planned through 2019 so we’ll have to wait and see on that one.”

Per the Orange County Housing Report, “With a much higher supply of homes, 53% more than last year, and muted demand, 24% less than last year, the Expected Market Time (the amount of time it would take to place a home on the market today and open up escrow down the road) has not stopped climbing since August. Typically, it remains flat through the end of the year. Today, the expected market time eclipsed the 120 mark for the first time since January 2011, climbing to 122 days. Statistically, Orange County Housing leans towards a buyer’s market, ending the 6.5 year market run-up.” Please give me a call at my new number, 949.667.4664, or email me and let’s see how I can help get you increase sales & become more Organized & Orderly in 2019!

It’s all in the numbers

“What many in 2016 thought would never happen again is now reality,” writes Wolf Richter of The Wolf Street blog. “A line in the sand has been breached.” He explained that the average interest rate for 30-year fixed mortgages with conforming loan balances ($453,100 or less) and a 20% down-payment just passed 5% – the highest since 2010, according to the Mortgage Bankers Association. This, however, is not quite the “pain threshold” for the housing market, Richter wrote. No, that number is 6%, but that rate is moving ever closer. “This is still historically low. It would take rates back to December 2008, when the Fed was kicking off its first round of QE to repress long-term rates and inflate asset prices,” he said. “Beyond that are the now unimaginably high rates of 7% and 8%.” Here’s a chart for some perspective: 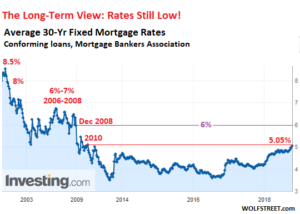 Mortgage rates loosely follow the path of the 10-year U.S. Treasury note . The spread between the average 30-year fixed mortgage rate and the 10-year comes in around 1.5 to 2.0 percentage points over time. The yield on the benchmark government bond has soared this month to roughly seven-year highs amid worries that increasing inflation will erode the value of fixed-income assets. “The 10-year yield has moved in two surges so far in this rate-hike cycle, each of them over 1 percentage point, with some back-tracking in between,” Richter wrote. “It appears to have launched ‘Surge 3.’ If it plays out, this surge would push the 10-year beyond 4%. And this would bring the 30-year fixed rate into the neighborhood of 6%.” So it appears that the loaded language and vague threats of a failing housing market will not affect Orange County …at least not as quickly, or as severely as the rest of the country. 2019 could be an incredible year, competitive as hell, yes! Just remember to Keep Calm & Get Organized, I’m just a phone call away 949.667.4664.

According to The OCR, “This increase in inventory and drop in demand has flipped us from the strong seller’s market at the start of 2018 into a slight buyer’s market as we start 2019. This impact can be seen in the average days on the market, which has gone from 65 days on average last year to 127 days as of the beginning of 2019. That’s double from last year. So what does that translate into for our annual forecast? Home Buyers: more choices, more time to kick the tires, run the numbers, and get your loan even partially underwritten before you make an offer. You actually have time to go look at the house more than once, for more than five minutes, before you submit an offer. You’ll also probably be the only offer on the table. Multiple offers on the same home are no longer the norm. Home Sellers: it’s recommended to put your house on the market the Thursday before Super Bowl Sunday, which this year falls on Jan. 31. You’ll have it staged to perfection, take professional photos, and you’ll price it right at market value, and anything else you can think of to stick out for potential buyers. 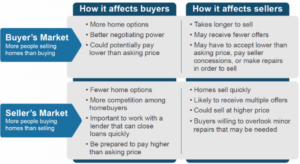 What’s going to happen to home prices/sales? Only time will tell where the market will land in Q1, let alone at the end of the year. Though sales & the accompanying mortgage rates may be unfallabley unpredictable, you can remind your client’s of how valuable a resource you are for them in the midst of all the competition. Being a Realtor means so much more than just selling a home, you are an invaluable asset to your clients because you know your community. Be sure to add the following value points to your repertoire: decorating, decluttering, personal shoppers, packing, unpacking, organizing, clean-up, haul away, and all-in-one moving concierge services. Organized & Orderly does it all! 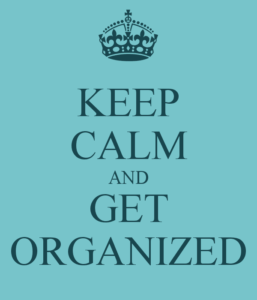 Need some inspiration?
January is National Get Organized Month started by NAPO, and their humble beginnings can be quite motivating. The National Association of Productivity & Organizing is a United States association dedicated to the field of organizing. In 1983, a group of women in Los Angeles gathered together when realizing they shared a common interest – organizing people’s homes, businesses and time. All of these women shared an entrepreneurial passion for helping others get organized. They started the Association for Professional Organizers and continued to meet regularly in their homes. In January 1986, the group had grown to 16 women who formally created a non-profit association that would meet regularly, collect dues, adopt bylaws and be run by a board of directors. This was officially the beginning of the National Association of Professional Organizers, as we know today. Today, NAPO has over 4000 members, including myself of course, and people all over the world! NAPO’s current tagline, The Organizing Authority, demonstrates their professionalism, expertise and service to those in the organizing field. January is now officially know as National Get Organized Month because of this amazing organization. So stay the course, you can do this, and stay tuned for pointers on get you through the next 2 trouble spots and remember, I’m always just a click away, or you can call me direct at 949.667.4664. Here are 12 Reasons you need a Professional Organizer in your life <3.