The Impact Of Rising Interest Rates 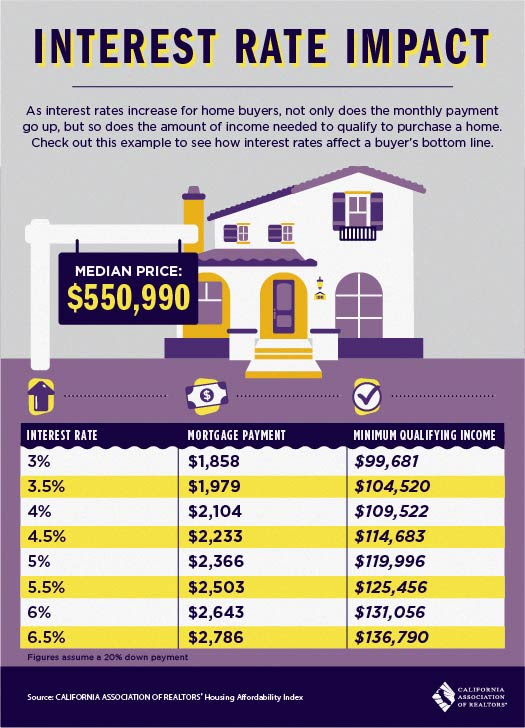 With interest rates going up, many buyers don’t realize the effects of waiting. All buyers are motivated by either one of two things – either they are motivated by time (they have an impending deadline to meet such as a relocation, a baby due, etc.) or they are product motivated (looking for the right home that meets certain criteria). While time motivated buyers generally have a greater sense of urgency than product motivated buyers, all buyers have an idea of when they want to be in their next home. The thing most buyers don’t know is how their timing, or lack thereof, is affecting them. In today’s market of low inventory, ever-increasing demand and appreciation, and rising interest rates, it’s no walk in the park for buyers. Lately, we’ve touched a lot on appreciation so today we’re talking interest rates.

Interest rates, though rising, are still incredibly low compared to the days of 15-20 percent. That being said, rates are beginning to hike and will likely continue to do so. The average is already at 5 percent compared to 4 percent just 6 months ago. That means to afford the median-priced home in California at $550,990, you’d have to make an additional $10,000 annually in income to qualify and your monthly would increase by $200 per month. That’s a whole car payment you’d be putting towards your mortgage and a generous pay raise. For some, this is feasible because they anticipate a promotion and, therefore, more spending power. However, if that promotion is less than $10,000 annually, then waiting does not make sense. Say you’re to be promoted 10 percent by the end of the year. In 6 months, the $550,000 homes you’re looking at today will cost you $200 more per month. It sounds harsh, but such is reality, As buyers, we are fighting the appreciation and interest clock. In this market, time is working against us. The longer we wait, the less we can afford. Thus, if you’reconsidering buying, it behooves you to get pre-approved now and start seriously shopping. If you’re motivated by time, you’re probably already thinking this way, but, if you think you have time, you may want to reconsider.